My contribution to tonight's pot luck is dessert.  What to bring that would satisfy everyone, including the gluten free guests?  Something warm and comfort food"ish", but upscale... Coconut Arborio Rice Pudding.  It's been years since I have had rice pudding, and it was probably canned and too sweet.  Coconut Arborio Rice Pudding is rich and creamy, a little crunchy from the toasted coconut and not too sweet.  Definitely a keeper! 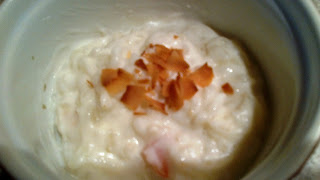 This rice pudding recipe is from a Food and Wine cookbook- it elevates traditional rice pudding with arborio rice, which is traditionally used to make risotto.  The plump arborio grains give the pudding a supercreamy texture, perfectly firm and chewy.  I added dried tropical fruit and a little cream to make it my own... and to add to the tropical, coconut flavours...

Directions:
In a large saucepan, combine the milk and cream, rice, sugar and water and bring to a boil.  simmer over moderate heat, stirring frequently, until the rice is tender and suspended in a thick, creamy sauce, about 30 minutes.  Stir in the coconut milk and dried fruit, and simmer, stirring occasionally, until the rice is very tender and the liquid is thickened, about 10 minutes.  Let cool slightly.

Meanwhile, in a medium saucepan, toast the coconut over moderate heat, stirring occasionally, until fragrant and golden, about four minutes.  Let cool.

Spoon the pudding into bowls, garnish with the toasted coconut and serve.