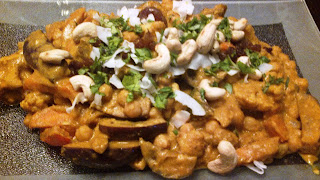 This is an Indian restaurant favourite for lovers of mild curries.  At home, you get to choose the vegetables (and the meat, if you must) - about five cups of vegetables are needed for this dish.  My neighbourhood grocer had amazing purple baby eggplants and Thai eggplants.  They will form the base of my Korma along with red pepper, cauliflower, mushrooms, carrots and peas.  I will admit to about eight cups of vegetables.  I can adjust the sauce if I need to.  A veritable rainbow!  Also, I know that chickpeas are not usually found in this korma.  But, I happen to like chickpeas and they add protein to my vegetarian dish  :-)

The Curry Sauce Base makes quick work of this dish...

Who doesn't love shrimp? and bacon, and almonds?  These are my favourite shrimp cakes- at least until I find another favourite.  Stevie (my daughter) prefers our shrimp and sweet potato cakes.  Not even the bacon and the almonds will change her mind.

I started making shrimp cakes, and crab cakes and fish cakes, in earnest when I moved to the West Coast.  It's a fresh seafood mecca- the best place to make/sample all manner of fish cakes...

They are incredibly easy to make.  There's nothing like spending an afternoon experimenting with ingredients and flavour profiles. I use a "mini hamburger stacker" to make these.  It helps to make them uniform and freeze them easily in the container, if you choose to fry them later. I try to keep a supply of fish cakes in my freezer.  They are quick to heat up and an excellent dish to offer guests or bring to a pot luck.

The almond crusted shrimp cakes are popular whenever I serve them.  They are well worth trying out.

Tête fromagée- back to my French Canadian Roots!

Tête fromagée is a traditional French Canadian specialty usually made around the Holidays.  Now, when I say head cheese, I inevitably see noses wrinkle.  So, it's time to set the record straight because this dish is amazing! 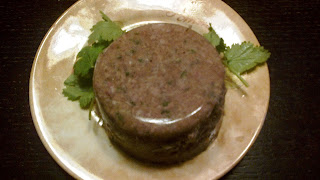 Yes, it used to be made with a pig's head.  But, please, not anymore unless you happen to live down on the farm.  I use pork hocks and veal (osso bucco actually)  to make my tête fromagée.

No, it's not fatty.  People are probably thinking of paté or cretons which would be much fattier.  I use the veal in my recipe to actually cut down on the richness of the pork and to keep it lean.

Yes, it is gelled.  Simmering the bones "low and slow" results in natural gelling.

Please, don't buy tête fromagée from your local grocery store deli- I guarantee it won't be the same, not even close!  That stuff is probably chock full of additives and preservatives; it's definitely not the same thing.

Yes, it is delicious served on crackers or bread.  I like to have my tête fromagée on toast, sprinkled with a little salt and pepper.  Delicious.

My mom would  it make every December- the fridge shelves were lined with small bowls of "gelling" goodness.  Although it was made to serve up at Réveillon (that's the big party after Midnight mass) and Christmas dinner, it was also gifted to family and friends.

Learning to make tête fromagée was an adventure- it's one of those dishes that mama has no recipe for (I don't think she ever had a recipe for the dishes that really mattered!) and that you should just know instinctively how to make.  Every French Canadian cook has her/his own recipe.  My first few attempts generated a lot of questions- What's the ratio of pork to veal? "Three to one, but you can also use only pork".  How do I know it's cooked enough to gel?  "You'll just know."  Really!  What about seasonings and spices- how much do I use?  "Start with a little and taste it.  You'll know."  Ahemmm.

Well, I did learn and I look forward to making it every Christmas.  The following recipe will make about seven cups of tête fromagée which I divide into one-cup ceramic pots. The quantities listed are approximate :-)

Curry Sauce Base - A Must Have for Your Pantry!

Let's face it.  We all like great food but sometimes need a little help getting it to the table- we just don't always have the time to cook.  Your grocery store could supply you with curry simmering sauces, but who needs the additives and other mystery ingredients? I came across this curry sauce base on a website-My Fancy Pantry. That's the starting point... Just the amazing smell wafting through my kitchen makes this recipe worthwhile.  You'll make enough for at least four curry dishes- so freeze the sauce in portions, about three cups each.  By adding spices and vegetables and/or meat you can have a great curry on the table in less than 30 minutes.  No one will ever know you didn't spend the afternoon stirring the pot.  Wonderful! 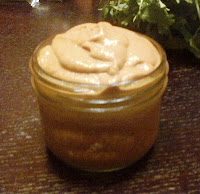 Remember, because this is a curry base, it should not be spicy- it should have a pretty neutral Indian curry taste. You'll "season" it up when you make a specific curry...

Cheesecakes are pretty impressive desserts.  My daughter Stevie and I used to make them often, usually at Christmas. We explored New York style, ricotta style, chocolate, vanilla, lime- all kinds.   I now tend to make them in "bite-size" versions, freeze them, ready to satisfy my sweet tooth.  A full size cheesecake would only lead to over-indulgence, a caloric overdose. 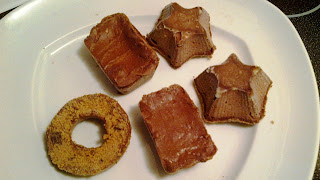 Bittersweet chocolate fans will love this cheesecake- creamy and light but not as high as the typical New York style cheesecakes.  This recipe will make a 10" cheesecake (you'll need a springform pan) or about 20 "two-bite" or "three-bite" pieces.  You can buy some really nice silicon molds or use mini cupcake molds. 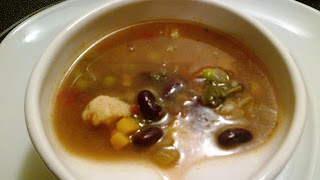 The Queen of vegetable soups, minestrone is a perfect hearty winter soup (or summer soup, just change up the vegetables).  Cutting up the vegetables may take a little time, but after that, it's quick and easy.  And, I have a little secret- add another great layer of flavour to your soup by throwing in a parmesan cheese rind.  After grating the parmesan, just freeze the rinds for your future minestrone.

This recipe serves six to eight as a main course.

Boeuf Bourguignon (aka Beef Burgundy) is the cadillac of stews.  Layers of flavours, low and slow simmering, big chunks of beef complemented by earthy mushrooms and delicate pearl onions- and don't forget the full bodied wine.  It's the perfect dish to serve after a day on the slopes or for an elegant dinner party...

The cut of beef you choose is important for this dish.  Actually, blade roast is a cheaper cut but so much more flavourful.  It's perfect for this dish which is simmered slowly until the meat is melt-in-your-mouth tender.  Traditionally, you would use red burgundy or Pinot Noir but I used an Okanagan Cabernet Sauvignon.  It's nice to live down the road from the winery!

You know those delicious, famous crisps sold in the grocery stores?  Well, I've been experimenting with my own crisps in unique, awesome flavours and they are wonderful!  I found the basic recipe on the Internet- that's the starting point - and then, the fun begins...

I've based my crisps on my favourite flavour combinations... you can do the same.

The yield for each recipe will depend on how thinly you slice the crisps.  I bought a food slicer to ensure even slices, a little less than 1/4 inch thick.

I love French Onion Soup! Dinner for two by the fireplace, a little candlelight, a great bottle of wine, a crispy salad and bubbly, crusty onion soup. Perfect!

Most restaurant and grocery store French onion soups are either too salty or too watery and flavourless. If you love good food, it's so frustrating.  Sooo, it's well worth the effort to make it from scratch, the long way... but make a big batch and freeze it so you'll have lots on hand.  However, if you must, shortcuts are included at the end of this recipe.

Last week, I prepared two different batches: one with red wine and another with porter beer.  Both delicious!  The beer version was just a tad sweeter.  They were made for Neil, Carol and Barry who rated this recipe a double thumbs up and reordered more...

It will take two days to make the soup.  On day one, you make the beef broth.  That's easy and doesn't need your attention very often.  You'll be busier on day two... This recipe will make six servings and can be doubled or tripled.

Call me the shortbread Queen!  There is an art to baking that perfect shortbread!  And, I've mastered it...
Thick, lightly golden, melt in your mouth shortbread... and only a few simple steps to keep in mind. 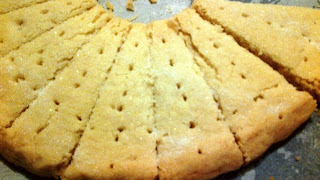 The kitchen is filled with the wonderful scent of baking and batches and batches of the golden wedges cooling on every countertop.  Shortbreads are the perennial Christmas cookie and so easy to bake.  There are only five ingredients: butter, sugar, two types of flour and salt.  This recipe will make a 9" round, cut into 16 wedges.

The Holidays are a busy time for everyone.  I'm always on the lookout for easy desserts and treats to offer to my guests or bring along as hostess gifts.  This is one of them.  This chewy, decadent chocolate treat looks and tastes spectacular and is so quick and easy to make.  It will please any chocoholic in your circle of friends and is a great treat to serve with coffee.

My "Go To" Healthy Salad- Sooo Good and Sooo Easy!

Put on your creative hat- there's no "strict" recipe for this salad.  Just begin with beans- aduki, black, mung, lentils and let your taste buds run wild...  I served this salad to the Ladies Bridge group and it was a hit! 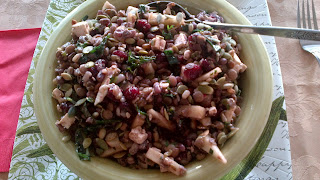 This shrimp, mango, coconut mixture began as a sandwich filling.  But it's also great as a topping for crackers  or toast... I served this dish at a recent Bridge Club luncheon and it was a hit with the ladies...

I like to have a selection of appetizers in my freezer.  Just in case guests drop in or to supply my friends who have friends drop in.  I made these meatballs with chicken but you can use turkey or veal or pork and they are baked in the oven- no deep frying.  You can cook them then freeze then reheat in the oven-so convenient.

The fragrant sesame oil and crunchy water chestnuts provide great Asian taste.  They will be a hit with your guests.

Makes about 32 meatballs, depending on the size.  These are about 1 tablespoon in size.

One of my favourite meat shops in Vancouver is located on Commercial Drive- J N and Z Deli.  They are a long time East European deli serving customers the old fashioned way- right down to the brown paper wrap.  One of their most delicious products is store smoked pork hocks which they hang in their front window.  This meat adds amazing flavour to any dish.  At Doris' instigation, I prepared a smoked pork ragu to serve with your favourite pasta.

In Kelowna, smoked pork hocks are available at Illichmann's Meats on Gordon Drive.

This recipe will serve four generously.