I am always looking for new lunchtime ideas.  This salad is delicious, nutritious and so easy to prepare.  I just love the roasted butternut squash, the curried dressing, healthy kale and toasted nuts- all the high notes in my kitchen! 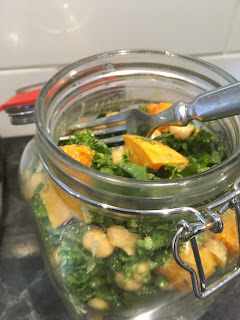 This is one recipe you want to make in a big batch.  Bonus, it gets better as it ages.  So when you need a burst of Sicilian summer goodness, just add a little caponata to crostini, chicken or your favourite sandwich. 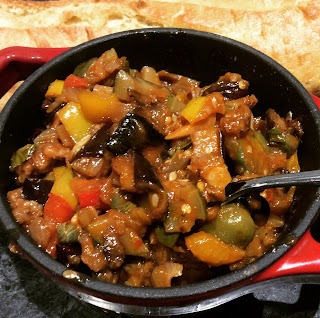 Instructions
Preheat the oven to 400 degrees.

Generously coat a large, wide, deep pot with olive oil.  Toss in the onions and season with salt and crushed red pepper.  Bring the pan to medium-high heat and cook until the onions are soft and very aromatic, five to six minutes.  Add the celery and fennel, season with salt and cook until soft, seven to eight minutes.  Toss in the garlic and cook for another two to three minutes.

Toss in the red and yellow bell peppers and cook for five to six minutes.  Add the zucchini, stir to combine and cook until the zucchini softens, seven to eight more minutes.  If the pot seems dry and is starting to burn, reduce the heat and add a few drops of olive oil and about 1/2 cup water.  Toss in the roasted eggplant.

In a small bowl, dissolve the sugar in the vinegar and add to the pan.  Stir in the tomato paste.  Taste and adjust the seasoning if needed.  The sugar and vinegar will make things tangy.

Toss in the pine nuts, raisins, olives, and capers and cook for another ten to twelve minutes.  Add a little more water if the mixture seems dry, then taste to make sure everything is delicious.  Let cook and serve at room temperature.

Candied Chiles- these are cool!

A new favourite for my pantry.  This recipe comes from Mrs Wheelbarrow's Pantry- a favourite preserving book.  I have made candied jalapeños and candied red chiles- both turned out great!

These can be searingly hot, depending on the chiles your choose.  Serve them as a snack with your favourite cheese, add to your favourite dishes, garnish a cocktail.