Surprise Birthday Party BBQ for forty of your best friends.

The challenge: providing food for forty guests, at the cottage.  No oven, little fridge space, only a microwave (god forbid!) and a BBQ (bonus).  That was my mission.

All the dishes had to be prepared in advance and transported to the cottage.  The meat has to stay moist and "survive" reheating.  The salads has to stay crispy.  My menu:

A selection of baguettes and foccaccia breads

The best cut of meat for pulled pork is a pork butt- bone and all.  So I estimated about 1/4 lb per person of pork and the same of chicken.  For 40 guests, that translates into 10 lbs of pork and 10 of chicken. Eveything was cooked ahead in my oven, then "pulled" and placed in large pans.  BBQ sauce was added to keep everything moist.  Cover with foil and it's ready to be reheated gently on the BBQ.

Saucy tip:  the pork roast provided great drippings so when cooked, I drained the drippings into a measuring cup and placed in the refrigerator for about an hour, until the fat rose to the top and could be scooped out.  The "broth" was added to an artisanal store bought BBQ sauce to boost the great pork flavours.  Send along some extra to serve along with the meat.

We wanted to use slider buns but they only came as white "blah" buns so we decided to slice up some great baguettes and foccaccia cut into squares and halved.  It worked!

I estimated about 1/2 cup of each salad per person and then added an extra two cups of each.  The cole slaw was meant to serve on top of the pulled pork.  The other salads, on the side.

The feedback from the party was positive.  The hosts were pleasantly surprised at the success of the kale salad.  A hit, especially with the kale newbies!

A Summer Staple and great for BBQ - Bean Salad

My bean salad marries the best of summer fresh- green and yellow beans- with great dried beans- red and white kidney beans, chickpeas, A light dressing ties it all together.

This salad can be made ahead and left to marinate for a few hours. 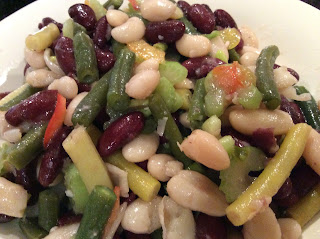 To serve about eight guests.

I often prepare this kale salad for kale newbies.  It's so healthy, colourful, flavourful and so easy to make.  This is a versatile salad recipe.  Along with the kale, I like to add a dried fruit (usually dried cranberries), a toasted nut (I like walnuts), possibly a seed (toasted sunflower or sesame) and some fresh vegetables (cucumber, onions, tomatoes, etc.) So, check out your pantry and your fridge. 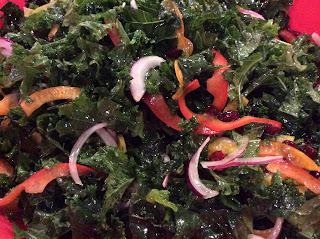 This salad will serve about eight guests.

In Italy, that's pumpkin cake with pine nuts and apricots; in Canada, I make it with a twist: maple syrup, walnuts and dried cranberries.  In either country, it's moist, fragrant and easy to bake. Delicious!

My recipe is a twist on the one provided by Eliza Green in her great cookbook "Starting with Ingredient Baking".  I made this cake for an office bake sale and fundraiser.