Arroz con pollo- every mamacita has a great one!

Arroz con pollo (aka chicken and rice) is like a Mexican version of Spanish paella and it's delicious.  Perfect for a family dinner, your next dinner party or for a pot luck.  I like to double the recipe and tuck away half in the freezer- two portions per foil container- for weekday dinners. 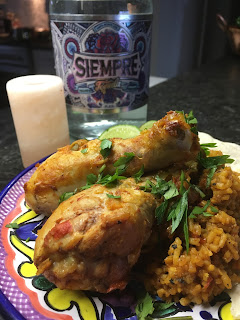 Serve with a green salad and voila!


Directions
Season the chicken pieces with salt and pepper. In a large skillet, heat the oil over medium-high heat. Brown the chicken thighs, turning once, until golden, approximately10 minutes per side. Transfer to a plate and set aside.

Add the rice, Sazón, and saffron and cook, stirring, for 2 to 3 minutes. Pour in the chicken stock, season with salt, pepper, and hot sauce, stir, and bring to a boil. Reduce the heat to maintain a simmer and nestle the chicken thighs skin side up in the rice. Cook, partially covered, until the rice has absorbed the liquid and the chicken is cooked through, 25 to 30 minutes. If the chicken skin is not crisp, place the pan under a hot broiler until the chicken is crispy and golden brown on top.

To serve, remove the bay leaves, sprinkle the cilantro and parsley over the rice, and gently stir to incorporate. Serve directly from the pan.

You can serve this dish with a side of yogourt to which you have added grated lime rind.  Have hot sauce ready to serve as well.
Posted by Gourmet Jo at 10:02 PM