I ran into this dish listening to an interview of two guys running a restaurant in South Carolina.  It turns out that it dates back to the 1700's when ships arriving from the Far East, India, came to the Southern US ports to trade.  The captains brought the recipe with them.  So, I present to you an American version of curry. 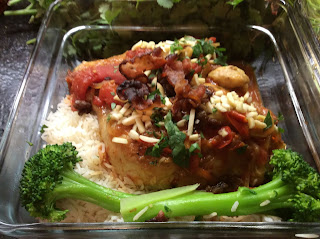 For the curry mix:
Combine all spices in a small bowl.

For the coconut rice with green onions:
Melt the butter in a medium saucepan over high heat. Add the onion and cook until soft, about 2 minutes. Add the rice and stir to coat the grains in the butter. Add the coconut milk, water, salt and pepper and bring to a boil, stir once, cover the pot, reduce the heat to medium-low and cook until tender, about 16 minutes.

Remove from the heat and let the rice sit, covered for 5 minutes. Remove the lid, fluff with a fork and fold in the green onion. Let sit 5 minutes before serving.

For the country captain chicken:
Preheat the oven to 325 degrees F.

Heat the oil in a large, high sided saute pan over medium-high heat. Add the bacon and cook until golden brown and crisp. Remove with a slotted spoon to a plate lined with paper towels. Add the butter and 1 tablespoon of grapeseed oil to the rendered bacon fat in the pan and heat until it begins to shimmer.

Add the onion and bell pepper to the pan, season with salt and pepper and cook until soft, about five minutes. Add the garlic and the serrano and cook for one minute. Stir in the curry powder and cook for one minute. Add the wine and cook until reduced by 3/4. Add the chicken stock, bring to a simmer and reduce slightly. Stir in the tomatoes, currants or raisins, thyme, 2 teaspoons of honey and season with a little salt and pepper and bring to a simmer. Nestle the chicken thighs into the pan, cover with a tight fitting lid and bake in the oven for 50 minutes. Remove the lid after 50 minutes and continue to bake an additional 15 minutes.

Remove the chicken to a platter and tent slightly to keep warm. Put the pan and sauce back on the burner over high heat and bring to a boil. Let the sauce reduce slightly, then season with salt, pepper, and honey, to taste. Stir in the parsley. Spoon the sauce over the chicken and top with the bacon, almonds and more parsley. Serve with Coconut Rice with Green Onions.