My 2020 garden is bursting with hot peppers!  What to do with the bounty?  Everyone loves bread & butter pickles - why not make some with jalapeños, mostly, with a few other peppers thrown in: poblano, serrano, etc.  Looking forward to topping tacos and burgers or on the side of roasts...  on a charcuterie plate. 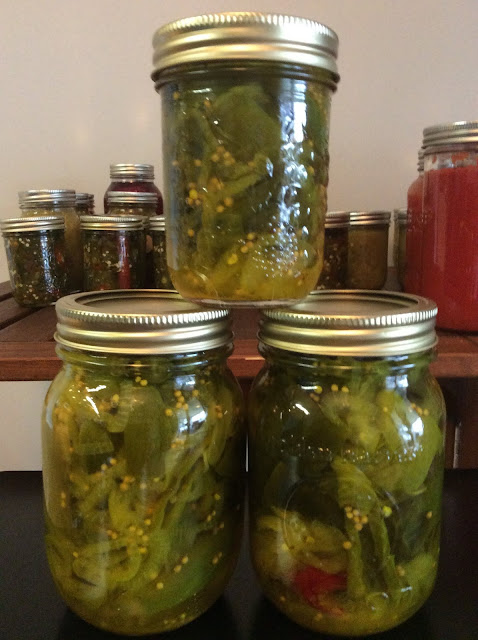 I let them sit in the jar for a few weeks before trying them, to allow the heat to mellow and the flavours to meld.  Would you like them milder?  Place them at the back of the fridge for another month and then taste...

If you are new to pickling with hot peppers, it is highly recommended that you wear plastic gloves when cutting and seeding the peppers.  Don't touch your eyes or your lips or they will burn. I know because I tend to forget the gloves :-)

Cut the stem end off of the jalapeños, then cut them in half lengthwise and remove the seeds.

Place the peppers and onions in a large bowl.  Mix in the salt, cover with ice and chill.  Alternatively, cover and place in the fridge for at least four hours.

Rinse and drain the peppers and onions.

In a 4 or 6 quart pot, put the vinegar, sugar, and spices. Bring to a boil to dissolve the sugar.  Add the peppers and onions and bring to the boil again and simmer until they vegetables are cooked through- the peppers will turn a dull green and the onions will be transparent- about five minutes.

Using a slotted spoon, remove the peppers and onions from the pot and pack into your jars, leaving about one inch of space from the top of the jar.  Ladle the vinegar over the peppers until they are covered- distribution the cinnamon sticks among the jars.

Clean the rims of the jar, then place the two piece canning lids.  Process in a steam water bath (or boiling water bath) for ten minutes.  Let the jars rest for about two weeks before opening.