Leek and Potato Soup- the Rustic One

One of my first "newlywed" dinners featured Vichyssoise, a creamy, cold leek and potato soup.  I hovered over it, pureed and strained it to absolutely remove any lumps and generally babied it.  I was entertaining my in-laws after all and wanted soup perfection!  Well, the soup was great (and so was the rest of the dinner).  Thing was, my guests didn't like cold soups but they valiantly slurped on and only mentioned their preference over dessert.  Had I known, I could have made this rustic version... 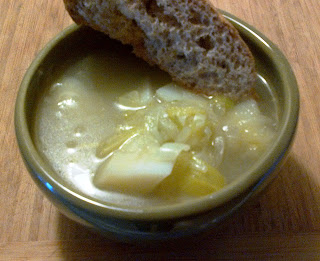 Rustic leek and potato soup is the hearty version.  I like chunky soups so I save some of the sliced leek to add at the same time as the potatoes.  They keep their shape in the soup when served.

When winter winds start to blow, this is one of the warming "go to" soups.  Serve it with a wonderful baguette and you have a meal!


Ingredients
5     lbs of leeks (cut off the root end and use only the white and light green part).  Clean thoroughly, halve lengthwise and slice into 1-inch pieces.  Save one cup of the sliced leeks to add with the potatoes.
1     large onion, diced
6     tbsp butter
1     tbsp flour
6     cups chicken stock, preferably homemade
1     bay leaf
1 3/4 lb of red potatoes, peeled and cut into 1-inch dice
Salt and pepper to taste

Heat the butter in a large stockpot over medium-low heat until foaming.  Stir in the leeks and onion, increase the heat to medium, cook until the vegetables are tender, about 15 minutes.  Sprinkle the flour over the mixture and stir to coat evenly.  Cook until the flour dissolves.


Increase the heat to high.  Whisking constantly, add the stock gradually.  Throw in the bay leaf, the saved one cup of leeks and potatoes.  Simmer, covered, until the potatoes are almost tender, about five minutes.  Remove the pot from the heat and let stand until the potatoes are tender and the flavours have come together- about 15 minutes.  Taste the soup and season with salt and pepper.  Remove the bay leaf before serving.


The soup can be refrigerated for up to two days.  Reheat over low heat- do not let it boil.

WANNA PLAY?
To make this soup even more rustic, you could add sausage pieces, such as kielbassa. Or, top it with shaved parmesan.
Make it vegetarian by using vegetable broth instead of chicken broth.
Puree the soup, add cream and call it Potage Parmentier.  This soup is served hot.
Cool your potage parmentier, serve it cold, sprinkle chopped chives over it and call it Vichyssoise...