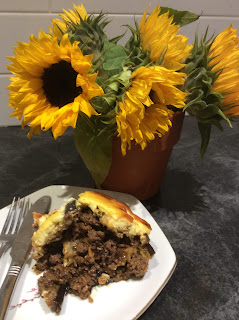 I love moussaka, but finding the best recipe was a challenge.  Luckily, I found an article all about moussaka- deconstructed and rebuilt into the ultimate dish!  With a few of my changes, this moussaka is amazing.  This meat version can easily be converted to a vegetarian version by substituting the meat with lentils, green and brown lentils... very healthy!  Here goes...

Directions:
1. Pre-heat the oven to 350F. Cut the eggplant lengthways into 1/4 inch slices, and place them on oiled baking sheets. Brush with olive oil and season. Bake for about 25 minutes until soft and golden.

2. Meanwhile, put 2 tbsp olive oil into a large frying pan over a medium high heat and cook the onion until soft. Add the garlic, cinnamon and oregano and cook for a further couple of minutes, then stir in the ground beef. Turn up the heat slightly, and brown the meat well, cooking until the mixture is quite dry. Stir in the tomato purée and wine, bring to a simmer, then turn the heat down low and cook for 30–40 minutes until most of the liquid has evaporated. Season and stir in the parsley.

3. Meanwhile, make the bechamel. Bring the milk to just below boiling point, and melt the butter in another saucepan. Stir the flour into the butter and cook for a couple of minutes, then gradually whisk in the hot milk. Cook until you have a thick sauce, then stir in the cheese until melted. Take off the heat and allow to cool slightly, then beat in the eggs, salt to taste and slightly more nutmeg than you might think wise (it's a strong flavour, but you need a heft of it in this dish I think - half a teaspoon at least).

4. Arrange a third of the eggplant in the base of an oven dish, and top with half the meat. Repeat these layers, then finish off with a layer of aubergine, and top with the sauce. Bake for about 45 minutes until well browned, and then leave to cool for half an hour before serving.