Take a basic recipe and make it your own with a new flavour profile.  I've made two different varieties- Moroccan and Curried Indian.  Here is the Moroccan version.

I love the warmth of cinnamon and cumin, the sweetness of dried apricots, the crunch of almonds... all rolled into flaky puff pastry or, for a change of pace, filo dough.  These freeze well- something to look forward to when you want something quick and tasty... 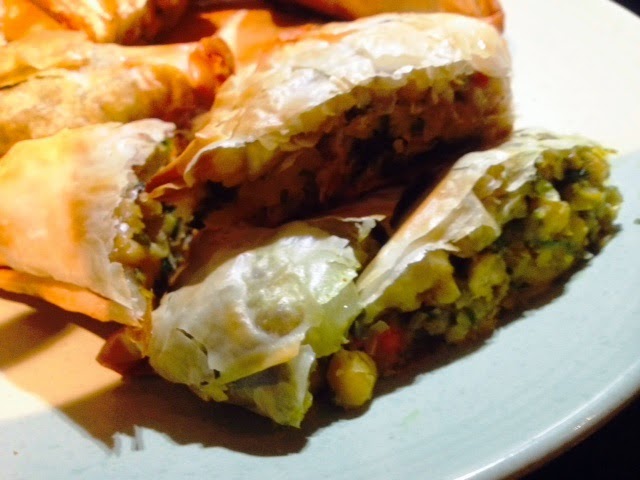 When I create a new recipe like this one, I don't always measure.  For this filling, just add, taste, adjust and you'll be fine.  If your Moroccan includes something different, go for it!


Directions
Soak chickpeas overnight.  Drain, cover with water, add the cinnamon stick and cook until soft.  Drain chickpeas and mash them until slightly lumpy- the mixture should not be smooth.

Transfer the mixture to a bowl, add the chickpeas, breadcrumbs, lemon juice, yogourt, honey, apricots, almonds, mint, parsley and cayenne.  Add salt to taste and adjust the other seasonings.

Preheat the oven to 425 degrees.

Divide the mixture into two portions.  Roll each portion into a log the length of your puff pastry rectangle. Place each log lengthwise into the center of the puff pastry and brush the long edge with the egg wash.  Fold the pastry over (like a sushi roll).  Brush all over with egg wash and sprinkle with paprika.  Bake in the oven for approximately 12 minutes or until golden brown.  To serve, cut the roll into serving pieces.

If using filo, cut the sheets into six-inch wide strips.  Place one sheet on the counter, brush with melted butter and top with another sheet, again brushed with butter.  Place about 1/2 cup of filling at one end and fold over. Use less filling for an appie size portion.  Bake in a 400 degree oven until golden.

If you want to freeze the rolls, do so before cooking them.  Place them on a cookie sheet, in the freezer, until frozen.  Then place into freezer bags until ready to cook.  When you want to serve, preheat the oven and cook from frozen.