These are Heavenly! Marshmallows...

Homemade marshmallows... once you've made these easy treats, you'll never, ever be tempted to buy the grocery store variety.  Not even close!  This is a great project to do with kids...

I found the basic recipe in a Gourmet magazine.  After making up a batch of the marshmallow mixture, I "consulted" with my granddaughter for the flavours.  Here is what we decided: plain with toasted coconut coating, then a cocoa covered, nutella swizzled variety (you have to try this one) and a colourful purple variety (food coloring swirled through the marshmallow) with a plain sugar coating.  These marshmallows are amazingly light, fluffy, exactly what a real marshmallow should be.  All of our varieties were amazing, especially the nutella one! 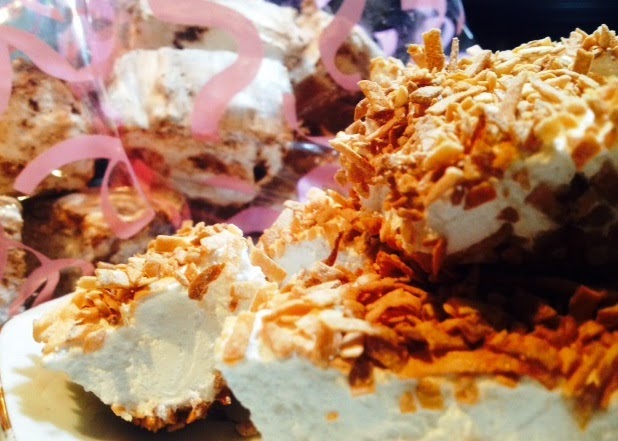 Go ahead and try our varieties then experiment.  I bet you can come up with more favourites.

Directions
Oil the bottom and sides of a 13- by 9- by 2-inch rectangular metal baking pan and dust bottom and sides with some confectioners' sugar.  If you are making a few varieties, oil up two (or three) smaller pans.

In bowl of a standing electric mixer, sprinkle gelatin over cold water and let stand to soften.

In a 3-quart heavy saucepan cook granulated sugar, corn syrup, hot water, and salt over low heat, stirring with a wooden spoon, until sugar is dissolved. Increase the heat to moderate and boil the mixture, without stirring, until a candy or digital thermometer registers 240°F., about 12 minutes. Remove the pan from the heat and pour the sugar mixture over the gelatin mixture, whisking slowly until the gelatin is dissolved.

With a standing (or a hand-held electric mixer) mixer, beat the sugar/gelatin mixture on high speed until it becomes white, thick, and nearly tripled in volume, about six minutes. (if using a hand held mixer, it will take about ten minutes). In a large bowl with cleaned beaters, beat the whites (or reconstituted powdered whites) until they just hold stiff peaks. Beat the whites and vanilla into the sugar mixture until just combined. If you are making a few varieties, divide the marshmallow mixture into two or three bowls.  For the toasted coconut variety, spread toasted coconut over the bottom of the oiled pan, add the marshmallow mixture, then top with more toasted coconut.  For the nutella swirls, place approximately 1/4 cup of nutella in the microwave for 30 seconds to soften.  Pour over the top of the second bowl and swirl through the marshmallow with an oiled knife.  Instead of confectioners sugar, you could dust the bottom of the pan with cocoa powder, then top the marshmallow with more cocoa powder.  For coloured swirls, pour the marshmallow mixture into the last pan, then place a few drops of your favourite colour onto the top of the marshmallow.  Using an oiled knife, swirls the colour throughout the mixture.  Top with sifted confectioners sugar.  Chill the marshmallow, uncovered, until firm, at least three hours, and up to one day.

Run a thin knife around edges of pan and invert pan onto a large cutting board. Lifting up one corner of inverted pan, with fingers loosen marshmallow and let drop onto cutting board. With a large knife trim the edges of the marshmallow and cut the marshmallow into roughly one inch cubes. Sift remaining confectioners' sugar into a large bowl and add marshmallows in batches, tossing to evenly coat. Marshmallows keep in an airtight container at cool room temperature one week.
Posted by Gourmet Jo at 2:34 PM