There is definitely no definitive version of caponata in Sicily.  This is version number two, for when you want it to be relatively quicker (it will still need about 45 minutes to cook) and with fewer ingredients than the first version.  This recipe is based on one provided by David Rocco in his Made in Italy cookbook.  Version number three, coming this summer, is the one I've been canning for over a decade.  Still a favourite!

Serve this at room temperature on a piece of baguette, or warmed up, in a small bowl "on the side" or even as a topping for an omelet... 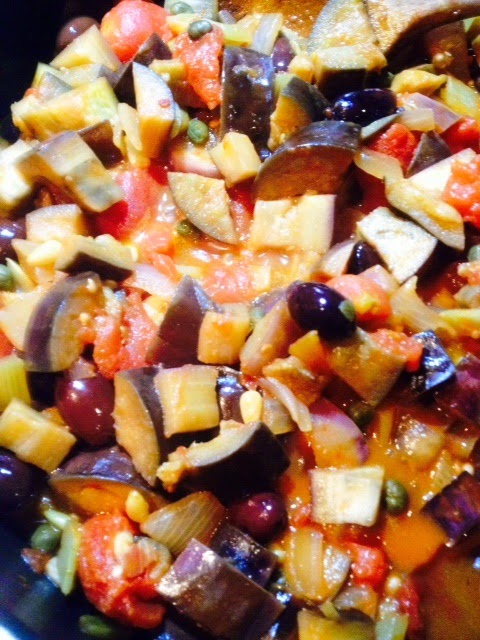 Be prepared- your kitchen will smell heavenly!

Consider the quantities flexible.  If you don't have red pepper, just add more celery.  Have a lot of zucchini, throw it in!

In a large pan, heat the olive oil.  Add the eggplant, onions, garlic and celery; season with salt and chili flakes and cook on high for about five minutes or until the vegetables have browned and softened.  Stir them around the pan a few times.  Lightly stir in the capers, olives and pine nuts.  Add the red wine vinegar.  Stir again and let cook a few minutes. Finally, add the tomatoes, bring to a boil, then lower the heat and simmer for approximately 40 minutes.  Taste and adjust the seasoning.